Photo of Simmondsia chinensis, the plant from which jojoba oil is derived

I’m sure you’ve heard of jojoba before, but do you know what it is and all the different ways it can be used? This oil is an amazing resource in cold, dry months, so I’m going to go over it in two-parts: First today, as part of my Beauty School series, I’ll explain jojoba and the various ways it’s used in cosmetics. Then tomorrow, I’ll show you how to do your very own at-home jojoba hair treatment! Let’s begin.

What it is: Jojoba oil “is the oil extracted from the beanlike seeds of the desert shrub Simmondsia chinensis.â€¹ The female variety of the plant produces a fruit, which in turn bears a seed containing a liquid wax. This oily wax is similar to vegetable oil, and is considered “unusually pureâ€: it contains essentially all-wax esters, Vitamin E, and phospholipids. It also has an incredibly long shelf life; according to the International Jojoba Export Council, properly packaged jojoba oil “can be stored indefinitely without degrading,â€² so that bottle of yours can last a very long time.

Legend has it that the Native Americans used jojoba oil for a variety of purposes, ranging from hair conditioners, to skin lubricants to even making coffee-like beverages! 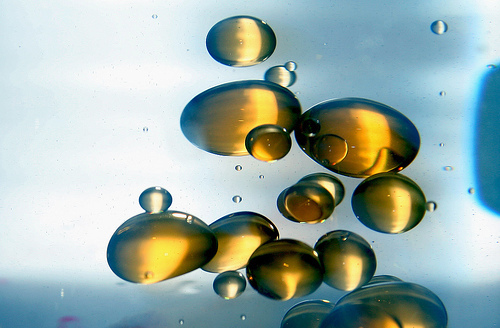 Why it’s awesome: Jojoba oil has a few distinct characteristics that make it so wonderful. It’s very similar to sebum–the oil that humans secrete to lubricate skin and hair–and can be used as a sebum substitution for people with decreased production. Conversely, it can also be used to remove excess sebum and product buildup on hair. Jojoba is also a powerful moisturizer, and is sometimes used as a perfume base. It’s antibacterial, anti-inflammatory, hypoallergenic, non-toxic and non-comedogenic. (Big words, I know.)

What is it good for? Pretty much everything. You can use jojoba oil for the following skin and hair care needs:

Tomorrow, I’ll give you my DIY instructions for an at-home jojoba rinse!

Do you already use jojoba oil? Do you have a favorite product that has jojoba oil in it? Tell me in the comments section below!